South Huntington, NY – August 18th, 2021 – Six years ago, South Huntington ruefully lost a beloved member of its family: Marissa Pastore. She was a student of Stimson at the time, but her spirit and story have lived on throughout the entire district and so, the South Huntington community continues to honor Marissa and her memory annually. Every summer, South Huntington’s Extended School Year (ESY) program hosts a commemoration of Marissa on the last day of the program. People unofficially refer to this day as “Marissa Day.” The district is paying special homage to Marissa this year because she would have turned 21-years-old this month. 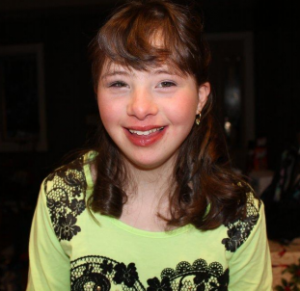 Marissa loved animals, flowers, music, horses, and reading. Her favorite holiday was Halloween, and her favorite ride at Disney World was “It’s a Small World.” She loved so many things that most girls her age loved, but Marissa was no ordinary girl. Following in her mother and father’s footsteps, Marissa was a Junior firefighter at the Huntington Manor Fire Department. Marissa was also a gifted runner. In the sixth grade, she won the Gold Medal for running in the Special Olympics in Nassau County. One of Marissa’s most ambitious goals for the future was to travel across the country in an RV. Marissa was a free spirit, and lived by the quote, “Life is a great adventure or nothing at all.” According to her mom, “[Marissa] borrowed it from somebody, and she lived her life that way. She could take the simplest days and turn them into something.”

With an extensive medical history, Marissa encountered many obstacles and battles throughout her life. She was born with Down Syndrome. At just seven days old, Marissa had to undergo surgery on her esophagus. The doctors did not think Marissa would live past 3 months old because she was born with only two chambers in her heart. When she reached three months, Marissa had open-heart surgery and defied all odds. At such a young and fragile age, she proved to be a fighter through and through.

With the unconditional love and support from her parents, Risa and Domenick, Marissa was able to enjoy her life amidst her medical battle. Disney World in particular was Marissa’s favorite place. After a pneumonia scare in the hospital, Risa and Domenick took every precaution necessary to ensure Marissa could go and have a good time. According to Domenick, “We had to
give her breathing treatments every four hours, so we knew every first aid station in every park.  They knew us because we had to drop off the machine and the medicine, and every four hours, we had to make a trek back to the first aid station to give her the breathing treatments. We went through the whole park like that with her, and she had a great time.” Thanks to her parents’
efforts, Marissa’s life was full of enjoyment.

In April of 2015, at the age of 14, Marissa was diagnosed with Acute Lymphoblastic Leukemia (ALL). She was immediately transferred to Cohen’s Children’s Hospital but soon found out her body could not tolerate chemotherapy. In July of that year, Marissa passed. She was a month away from her 15th birthday.

The South Huntington community continuously supported Marissa throughout her time in the district. “Whenever we’d have meetings here and everything, there was always a sincere interest in her education and well-being because she had so many difficulties,” Domenick explained. In addition to her academic needs, Marissa faced social and emotional challenges in school.
Marissa did not talk in school; she would go the entire school day without saying one word. With the help and support of multiple teachers and faculty members across the district, Marissa was able to overcome certain fears after staff specially developed ways to help Marissa succeed. Marissa communicated and participated in school through an iPad. The teachers would give her a project, and Marissa would go home, record herself on the iPad, and turn it in the following day. Marissa became so comfortable and close with one of her Oakwood teachers, “she used to have [Marissa] dancing down the hallways…” During her time in South Huntingtin, Marissa formed special bonds with several teachers and her bus driver.

“[South Huntington] is a tight-knit community,” according to Risa. When Marissa was diagnosed with ALL, members across the community came together to help the Pastore family. Friends and strangers provided meals for them for three months. When Marissa passed, the South Huntington community continued to rally behind the Pastore family. Mr. Smith, who was the principal of Stimson at the time, dedicated a little statue of a girl that was in the Stimson courtyard to Marissa. The district hosted a big ceremony at Silas Wood and mailed the statue to the family. Domenick noted, “They really cared about Marissa here.” South Huntington also provided support for Marissa’s younger brothers, Domenick and Ryan, to help them adjust and transition after their sister’s passing.

“It was her biggest fear when she was sick that she would have been forgotten,” Risa stated. South Huntington ensured that would never be the case. Every summer, Marissa attended South Huntington’s ESY program. After her passing, the last day of the program became a day to honor and remember her. Fire trucks from the Huntington Manor Fire Department drive by and the students and attendees wear pink – Marissa’s favorite color. One year, they had a big barbeque for everyone who attended. Each year, there are festivities to honor Marissa. To celebrate Marissa’s free spirit, South Huntington turns this day into a “great adventure.”