Letter To The Editor A Leader For All: Eugene Cook for Supervisor! Honor And Integrity

A leader for all: Eugene Cook for Supervisor!

The Town of Huntington has a big choice to make this upcoming November. What are the choices? To restore the honor and integrity of the Supervisor’s office or retain the stains that dirty it today. I’m proud to say, that I already have made up my mind. The office of Supervisor must be restored and the only candidate to do it, is Eugene Cook. 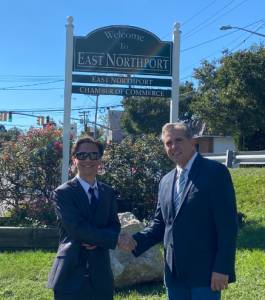 I have known Eugene Cook, personally, for the last six years, and let me say, he is a man of great integrity, passion, and dedication. Take it from me, those three important characteristics are what the Supervisor’s office deserves: and with Eugene Cook, we the people of Huntington will get just that. Another amazing quality of Eugene Cook is his strong commitment to the people of Huntington. His independent drive is what sets him apart from the rest. He is not beholden to any major political parties’ bosses, as his Republican opponent is, Eugene answers only to the people. We need a Town Supervisor who’s not caught up in petty partisan politics. Now, is the time to make clear, Eugene Cook is a candidate for the people, one party boss will try and spin Eugene as a “Democratic Operative,” attempting to, “steal the election,” from the Republican Nominee. Make no mistake, that is a bold face lie, and it is time we condemn the destructive rhetoric that clouds our politics. The people of this town, that is Eugene Cook’s directive, Democrat or Republican matters little, Huntington as a collective whole is what matters to him.

So, with that, my fellow Huntingtonians, let us rise to the occasion and vote on Tuesday, November 2, 2021 for true independent leadership that our town deserves. Eugene Cook is the one for us, the People of Huntington. Vote to restore the honor and integrity of the Supervisor’s office with him. An open-minded, dedicated person of integrity.