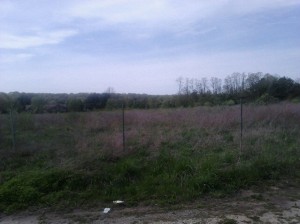 A public hearing has been scheduled for May 22nd, 2012, at 7:00 PM to consider a complicated zoning change that ultimately affects two distinct parcels in the Town of Huntington.  The deal preserves a parcel of open space that is located at the intersection of Round Swamp Road and Old Country Road, in Melville otherwise known as the Meyer’s Farm property.  The Meyer’s Farm property, a parcel of eight acres of open space, was at one time expected to be developed and converted into a religious facility.
The other parcel that is associated with the deal is an 18 acre commercial property located in the vicinity of the west side of Deshon Drive and south of Ruland Road, in Melville.  This parcel is owned by the Tribune Company, which, owns Newsday.  This parcel is directly adjacent to Avalon Bay Communities located in Melville.  Presently the Tribune parcel is zoned as Light Industry and as a result of the proposed zone change application will be changed to R-3M Garden Apartment Special District, which allows development of up to and including 14.5 units to the acre.  The proposed development for the Tribune property calls for 261 residential units clustered within the 18 acre parcel.
The deal includes something called a Transfer of Development Rights (TDR) of five acres from the Meyer’s Farm property to the Tribune Property.  What does this mean?  Well here is where things get a bit complex.  A (TDR) by definition is “a device by which the development potential of a site is severed from its title and made available for transfer to another location. The owner of a site within a transfer area retains property ownership, but not approval to develop. The owner of a site within a receiving area may purchase transferable development rights, allowing a receptor site to be developed at a greater density.”
In this case the TDR would essentially allow for five of the eighteen acres to be sold off and then utilized, according to the resolution, to erect a religious facility of up to 60,000 square feet.  In effect the eighteen acre Tribune parcel would physically include 261 units of housing within a thirteen acre portion of the said parcel and then the remaining five acres would be sold off for the purposes of erecting a religious facility of up to 60,000 square feet that was otherwise slated to be built on the Meyer’s Farm property.
261 units of housing built on thirteen acres is just over 20 units to the acre.  When it comes to development in Huntington, the devil is always in the details.  Will this land deal set a major precedent for the entire Town of Huntington?  The answer is simply yes.  If this deal passes it is fair to expect that other developers will look at this zone change as a green light for other land deals to be structured in this manner for the purposes of granting higher densities than what is currently allowable by town code.  The Zoning Board of Appeals (ZBA) certainly could now grant future developments based on the structure of this Melville deal.  Remember the (ZBA) rejected the proposed Gateway Gardens downzone in Huntington Station proposal based upon precedent.   Another question to ask is, will this decision impact the Oaktree Dairy property in Elwood?  Presently the proposal on the table for that parcel is 482 units of senior housing on thirty seven acres.  Based upon the Melville zoning change decision, could even higher density be a possibility for the Oaktree property?  Many residents in Elwood feel that the Oaktree proposal will forever change the character of the area. The Town Supervisor was quoted in Newsday stating that dairy does not belong in a residential area and that the Oaktree development proposal is a solution to that.  Many Huntington residents differ with that opinion.
Could have voter approved Town of Huntington Open Space Funds been used to preserve the Meyer’s property without creating a  precedent setting situation. Creative builders will surely come up with proposals that will impact the future of development and our open space.
Check back for the  entire proposed resolution on this Melville parcel zoning change.  It will be available  on our website within the next few days.  The public will have a right to ask these questions as well as many others about this proposal on May 22nd, at Huntington Town Hall beginning at 7 P.M.
Facebook Comments must be signed into Facebook

3 Responses to Important Zoning Change Resolution To Be Considered